Casey Currie comes from a Motorsports family that has been in business for over 50 years building high-performance rear ends for off-road and NASCAR style racing. Throughout his career, Currie has competed in various off-road series like MDR, participated in events like the Baja 1000 and King of the Hammers, and he has become recognized by the off-road industry as a voice of the young, up-and-coming generation of off-roaders.

“It’s awesome to take part in these events and run into people who know my dad’s work,” said Casey Currie, an off-road racing MagnaFlow ambassador. Currie drives an off-road style desert truck in the NASCAR Smoke Show events, a recent addition to the NASCAR race event format by the series title sponsor, Monster Energy. The activation brings smoke, noise, tire-slaying, and high-octane jumps to get the 100,000 strong crowds ready for the epic on-track action that NASCAR fans have come to expect.

While Currie’s career has been off-road focused he says it has always been a dream to be involved with NASCAR. “I never would have imagined I would be able to bring off-road racing to this series.”

During the Smoke Show, fans can see Currie drift his truck, fitted with Magnaflow exhaust, around obstacles and launch the truck into the air with jumps and ramps to get the crowd excited. Other drivers from different forms of Motorsports are also seen performing daring jumps and tricks.

“The crowd loves it, everyone loves watching trucks fly through the air,” Currie said, adding for those able to ride in the truck with him “it is the coolest experience of their life.”

Each show features a different course set up that is determined by the area allocated to it. “There isn’t any time for practice,” said Currie, explaining he has experience participating in other smoke shows held by Monster Energy. “The other drivers and I have all been doing this sort of thing long enough that we can just go out and drive.”

Other drivers that have participated alongside Currie include FMXs heavy-hitters Jeremy ‘Twitch’ Stenberg, and Keith Sayers, as well as BMX legend Scotty Cranmer and stunt riders from Unknown Industries. Over the course of the event, Currie says he shreds eight tires and the truck takes more abuse from the asphalt then it would if it were doing the same things off-road.

“It’s rewarding to see how excited people are about it” Currie said. “I love showing NASCAR fans what off-road racing is all about. This sport is my life, and all I ever want to do.” He added that the Daytona 500 has been his favorite NASCAR event to participate in because of how popular it is among race fans. For those inspired to get involved in off-road racing, he encourages them to get a vehicle and attend events, adding “don’t stop till you reach your dream.”

Currie has several events on the schedule for 2018 he’s looking forward to more NASCAR smoke shows this year. 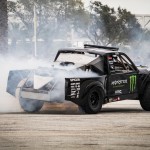